The Cobijo de la Calzada is located in Santo Domingo de la Calzada. Known for being a vibrant and beautiful location, what really makes it special are its festivities and its magnificent setting.

The Cobijo’s ENVIRONMENT – The environment belongs to the middle of the valley of the Oja River. An open valley, which begins its journey from south to north in the high peaks of the Sierra de La Demanda, in the Iberian System, and terminates at the calm waters of the Ebro river.

This river which gives its name to the whole region, by quirk of nature, while passing through the city has its waters filtered, leaving for almost half the year a channel and a bridge, curiously, without water.

The almost flat terrain invites us to walk either on foot or by bike, with rides such as “La Carrera” to the north, which leads to the chapel of the Bureau of the Holy or the walk of “Los Molinos” to the south, whose first stage brings us to the sports complex and swimming pools

if we continue and cross the bed of the river Oja, it leads to “Pata Gallina” old canal water supply of the city and much loved by Calceatenses celebrating at this place the snack of the day San Juan. All these rides have a nice wooded buckeyes, pines and poplars in the breeze of summer give us the feeling of freshness.

But if you prefer face more demanding, parallel to the road that connects to the south, with the town of Ezcaray goals, is the “greenway” old railway line, and today a promenade, which can lead us to make different tours depending on our forces or means of transport.

ITS FIESTAS -The festivities in honor of Santo Domingo de la Calzada, are undoubtedly one of the most unusual popular religious festivals known,  everything revolving around the figure and the legacy left by our Patron Saint.

Each act represents a part of the life of this hermit who lived in the twelfth century. These festivals are held annually between 10 and 15 May and are declared of National Tourist Interest.

The other highlite in the calendar of Santo Domingo are the traditional fairs of the Conception held every year between 6 and 8 December. The origin of the fairs dates back to the time of King Alfonso X, who granted this privilege to the city of Santo Domingo 1270. 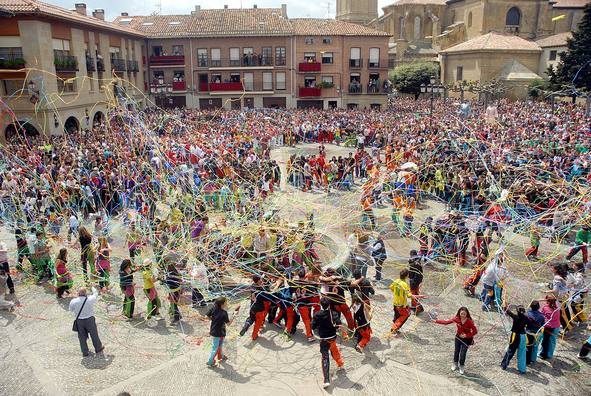 As part of these fairs different types of markets are held, including the medieval market, road market, organic farming market, national agricultural machinery market, and festival days celebrating the cuisine of La Rioja, which takes place in the Paradores.

Most of the parades and processions can be witnessed from the windows of our house The Cobijo de la Calzada.

The strategic location of Santo Domingo de la Calzada, in La Rioja, means that the tourist routes that can be taken are both varied and interesting, and divided between the two natural geographical areas: La Rioja Alta and La Rioja Baja.